Pan con pan, comida de tontos (bread with bread is food for idiots), but bread with something on top is a fast and filling meal in many countries of the world. Spain is no exception: the issue is how to navigate sandwich, bocata, montado and pulga to get what you want.

Here in España, what’s inside your sandwich depends at least partially on the sandwich style you choose. There seems to be a rough division between the classic Spanish sandwich styles (bocadillo, montado) and international or “modern” styles (sandwich, tosta). For example, Spanish classics like potato omelette, pork tenderloin and squid rings do not appear between slices of white loaf bread, only in bocadillos. Lettuce, asparagus and mayonnaise are rarely used in bocadillos but frequent in sandwiches, tostas and even pulgas. Tomato is more universal – frequent in sandwiches, not infrequent in bocadillos and montados; in Cataluña bocadillos are automatically served with tomato-rubbed bread (not sliced tomato) unless you specifically ask for plain bread.

So how to get your sandwich? Here’s a fast guide to some of Spain’s sandwich styles.

Sandwich: In a cafeteria or restaurant this is usually made with toasted white loaf bread, and usually with hot filling (grilled ham and cheese, bacon) except for vegetarian options or chicken, also with toasted bread but usually cold. This is a casual sit-down meal, usually eaten with a knife and fork, though it’s no longer odd to eat as finger food. Some places like Rodilla and Vienna Capellanes chains do cold sandwiches to go, often made with a mayo-based sandwich spread and sometimes with other kinds of loaf bread. Trivia: the phonetic or half-English spellings can be confusing: samwis, sanwhis, sandwish are all logical spellings in Spanish. And don’t forget bi-lingual slips: hay sandwiches means “there are sandwiches”, not sandwiches made of hay.

Bocadillo: A hearty sandwich on baguette bread. The bread is usually cold though what’s inside might be hot (sausage, pork tenderloin, fried squid rings). Finger food, easy to eat while standing at the bar or perched on a stool. Trivia: the slang word for bocadillo is bocata, usually indicating a larger-than-usual size. Oddest bocadillo filling ever seen: patatas bravas (fried potato chunks with hot sauce).

Montado, montadito: Usually but not always open face, a slice of cold baguette bread with something on top. Frequent for lomo (pork tenderloin). Montadito is the smaller version.

Tosta: Almost always open face, baguette bread or slice from a big round loaf, grilled so bread is at least warm if not toasted and what’s on top is warmed up.

And a few with-bread concoctions that are not quite sandwiches:

Empanada, empanadilla: Originally from Galicia in northwest Spain, Spanish empanadas are not the same as the Latin American version. This is kind of a cold, covered pizza with a tomato-onion filling with tuna fish or sausage; in Galicia there are many other kinds of filling. There are two kinds of crust, one a flaky pastry, and the other a hearty though not too-thick bread. Empanadas are big and often sold by slice or weight, empanadillas are individual portions. Good for takeaway, easy to eat on the street, good party food and an easy option for a light dinner.

Pincho: If you’d rather pass on the pan (bread) you can still get a fast and light meal: just go for a pincho, something with a bit of bread on the side. Most frequently seen for tortilla expañola (potato omelette), sausage or pincho moruno (skewer of meat).

*Desiree, Cafeteria in Tres Cantos (calle del Viento 7, near the train station).  Friendliest people and best coffee in town! Excellent tomato toast for breakfast (insider tip: get “media”, the full size is too big for a normal person).  Good carry-out, too.  Why go to Tres Cantos if you don’t live or work there? It’s the beginning / end for some excellent hikes, and one of the stops on the yearly 100 kilometers in 24 hours challenge 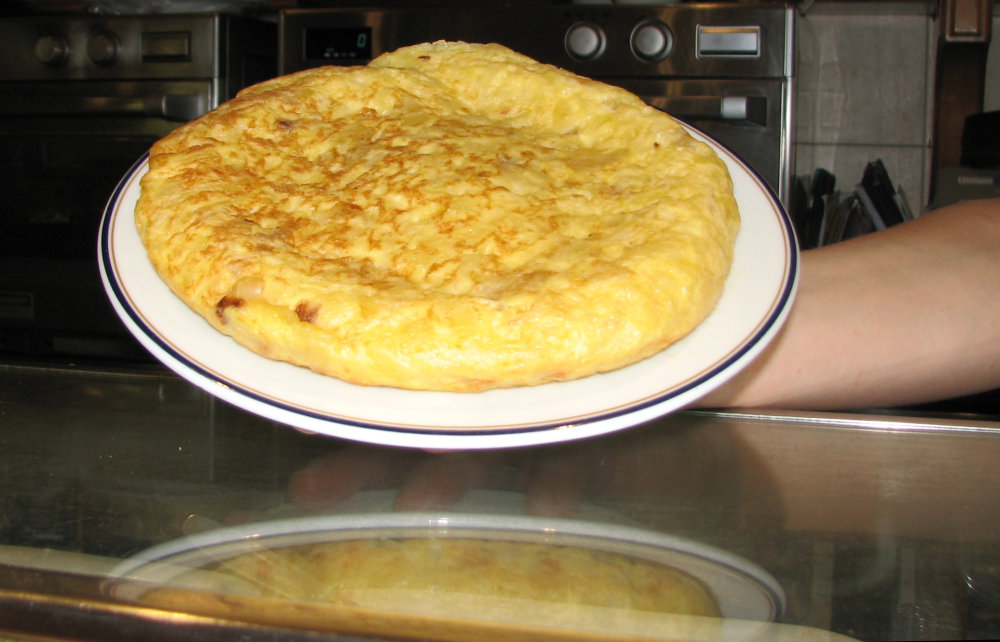 It’s probably the most universal of Spain’s traditional cuisine, a perfect example of simple ingredients that together add up to much more than you would expect. Available everywhere, cheap, and when it’s good, you can’t ask for a better fast and filling meal.

In case you haven’t guessed, we’re talking tortilla. Tortilla española, to be specific.

For those not in the know, “tortilla española” bears no relation to Mexican corn patties. “Tortilla española” is a thick omelette with potatoes and often a bit of onion or garlic. Other omelettes abound in Spain – with sausage, cured ham, peppers, vegetables or a mixture of all that is a one-meal dish. But it’s the potato version that really defines traditional cuisine in Spain – and in a land of hearty, simple food, that says a lot.

If you’ve never tried tortilla, you’re probably new to Spain because sooner or later – usually sooner – everyone has a chunk, a slice or a whole tortilla with friends. If your tortilla experiences have been few or not very pleasant, read on for some tips.

Where and when: Just about every informal eating establishment has tortilla, but don’t expect to find it in upscale restaurants or in tiny villages with few outsiders, where most people eat at home. Tortilla is usually available from about 10AM all the way to closing time at night – except times in between when they’ve run out and are making another – if you’re not in a hurry, it’s worth the wait to get tortilla right out of the pan.

How: Probably the most frequent way to eat tortilla is a “pincho” – a slice of omelette with a chunk of bread, great for a late breakfast or or a light lunch. You can also ask for a “bocadillo” – sandwich on “baguette” type bread – yes, mom, this is a heavy dose of carbs, potatoes AND bread? But it’s delicious anyway, and if you’re hungry and in a hurry, a fast way to get some filling food in your stomach – ask for fried peppers or tomato-rubbed bread if you need the veges to assuage your conscience. You can also ask for a whole omelette to share with a group: the usual dinner-plate size will feed five people or a hungry foursome. A whole omelette is usually served uncut – the traditional way is to cut it into more or less bite-sized squares (a little more than 1 inch / about 3 cms square), and spear with forks or toothpicks.

Tips for getting the best: Good tortilla is firm outside and slightly juicy but not runny inside, with the potatoes done but not crunchy or mushy. Finding this can be tricky; sometimes the potatoes aren’t right, or the tortilla is too dry or too runny, and personal taste does play into the definition of “good” (tortilla newbies often shy away from “juicy”, preferring something that most would define as too dry).

If possible, try to see the product before ordering. If the tortilla is under the countertop display case, or if you see a slice go by, check it out: is it dry? juicy? crusty around the edges? If you’re asked if you want it heated up, think twice. Room temperature is usually better than microwaved, which can turn tortilla dry and rubbery. Beyond texture, personal taste takes over: onion or not, salt, thickness, etc, all are tortilla variables that you can now explore.

So where can you get good tortilla in and near Madrid? I LOVE tortilla but have to limit my intake – it’s habit forming and fattening, so I restrain myself to special social occasions or pre-hike breakfasts, when lunch is miles down the trail. Thus the number of places outside Madrid – most are trailheads for favorite walks.

In the city: Kybey II on the southwest side of Olavide square, near calle Cid (metro Bilbao), excellent tortilla, and their tortilla and salad deal is well worth waiting for a table on their summer terrace – the place is always packed. Las Bravas on calle Alvarez Gato makes decent tortilla (metro Sol/Sevilla), and will spoon on their patented hot sauce. Meson La Tortilla on Cava San Miguel (metro Sol), along one side of the Plaza Mayor specializes in tortilla; a little touristy. Cabaña de Senen in the Casa de Campo park, west side of the lake (metro Lago), another outdoor venue with great tortilla and views of the Royal Palace.

Out of the city: Dos Castillas in Navacerrada pass – but think twice if it’s ski season, quality can drop due to crowds. Venta Marcelino in Cotos pass, used to be a favourite but it’s not so good recently (new cook?) El Brillante (calle La Fuente 20) in Valdemorillo has the best thick and juicy I’ve tried – and the service is really friendly.

Want to make your own? In addition to the general guidelines shown in any Spanish cookbook, here are some reminders and hints from experts. Get the right proportion of eggs and potatoes – this will take some practice, and it may be best to set aside part of egg mixture until you mix the potatoes and eggs – then you can add it if you need more egg. When potatoes are ready (not crunchy, softish but cooked,), pour them into a bowl with the eggs, mix well and pour the mixture back into the pan. Turning the omelette over is a delicate moment – once one side is set, pat the edges with a fork to consolidate a little, cover the pan with a big plate, flip and carefully slide the omelette back into the pan. It’s really important to know your pan, both the size and how it heats, and the different temperatures of your burners as you may need to vary the temperature during cooking. The tortilla artist who makes my favorite thick and juicy says temperature is the secret to making a great tortilla – then reflects a bit before saying that all you really need is a lot of practice.