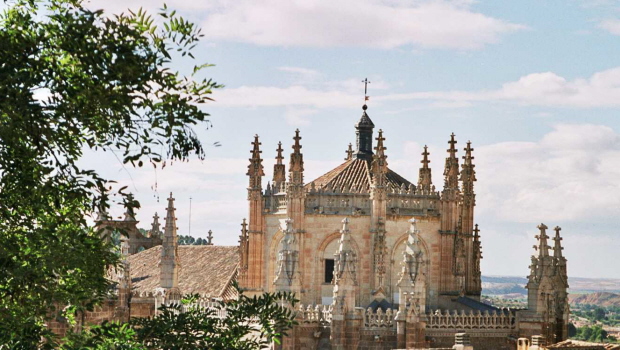 Toledo. (yawn). Too many Toledo visits have you burned out on that destination? Does the idea of another day in that city make you roll your eyes or start wondering if your guests can manage on their own?

Does that sound like your own experience? It certainly was mine, until I decided to visit Toledo and not see a single Important Monument. And wow, what a revelation!

This post shares some of the things I found that day and on later “offtrack” visits – this is not an art guide, history book or even an all-inclusive list of off-track sights, it’s just an attempt to get you past that yawn and into some exciting discoveries.

A good strategy for visiting off-track Toledo (or any other well known city): do some reading before the visit, have a sort-of plan but be ready to ditch your ideas if something more interesting comes up. That’s especially true in Toledo, where part of the fun is just wandering – the discoveries made on those wanders are even more special because of the surprise factor.

Here are some off-track ideas, purposely excluding all the big sights.

Jewish Toledo:  The old Jewish quarter merits some serious wandering, down along the river and partway up to the center city.  Two synagogues remain, both converted to churches or other uses after the Jews were expelled in 1492.  The Tránsito (now an excellent museum but as a “major” site not included here).  Don’t miss the “old” synagogue Santa Maria la Blanca, especially if you also visit one of the old mosques:  that gives you an excellent opportunity to compare / contrast and ponder the implications of a synagogue that looks like a mosque or a mosque that looks like a synagogue.

Muslim Toledo: The main tourist track in Toledo completly ignores the few remaining Muslim monuments, check them out to balance your visit to Toledo, City of the Three Cultures.

Mudejar architecture (walk-by noticing). Many of Toledo’s older churches are mudejar style, built by Muslim craftsmen who stayed in Toledo after it was conquered by the Christians. They continued to build in the style they knew well: decorative brickwork, interlocking arches and “onion” or lobulated arches and windows. Sign of the cultural plurality of medieval Spain: no one found it odd to have some Muslim-looking style in a church or synagogue (both synagogues have some Muslim-style decorations).

Cristo de la Luz: When I found this little jewel I was shocked I’d never seen it before. It was built as a mosque in 999 (less than 100 years before Toledo was conquered by the Christians) and later converted to a church, an unusual bit of Muslim culture in the “City of Three Cultures”. Stand to one side to see the scant difference between the original Muslim building and the mudejar-style apse added in the 13th c after it was converted to a church; be sure to look up at the nine cupolas in the original building (now the entrance). Recent excavations uncovered a Roman road in front of this old mosque. Ask someone to tell you the legend about Alfonso VI’s horse (hint: if you’ve done the Wall Walk in Madrid that legend may sound familiar). Location: North side of city, not far from Bisagra gate.

El Salvador church:  Another old mosque converted to church. This one is bigger than Cristo de la Luz. Probably built arount 1041 (shortly before Toledo became Christian again), has some archaeological remains from Visigothic and even Roman periods. The tower is original from the mosque, with belltower added after it was converted to a church.  Go up the tower for a view of neighborhood, and down to left and along side of nave to back for more remains.

Belltower of Santiago del Arrabal church (next to Puerta Nueva de Bisagra): This brick belltower may have been part of a mosque.

Mezquita Tornerias: Remains of a mosque on Tornerias street. Closed for rehab, but ask at tourism office just in case

Upper city: When the bustle of the busy tourist streets starts getting on your nerves, head for this area, with lots of cloistered convents and monasteries. You’ll find yourself walking between high walls with few windows and doors, routed this way and that by cul-de-sacs and tiny squares, sometimes along tunnel-like alleys with buildings over the streets (the “cobertizos”). Some of these convents have art collections, but schedules tend to be quite short so they may be hard to visit. But even without those visits a long walk in this part of town gives an entirely new vision of Toledo – and it’s usually almost empty.

With a map and a good sense of direction, you can find the Virgen de Gracia lookout, right over San Juan de Reyes monastery (see photo above). At the top of one of Toledo’s many hills is San Román church, now the Visigothic museum. Toledo was one of the most important cities under the Visigoths (aprox 450 – 711 AD), but these remnants and a few architectural bits and pieces are almost all that is left from that time. Location of the cobertizos : northwest of the Cathedral: find San Vicente church (go inside for a surprise) then along narrow alley to the left of church to Santa Clara square, around lower part of Santa Clara with retaining wall on your left, under the cobertizo and turn left at cross street under next cobertizo, then wander with map in hand.

Toledo City gates: Seeing a few of the gates will help you appreciate the importance of Toledo’s walls and the different periods of this ancient city. Most people only see the New Bisagra gate and the Arco de Sangre – get beyond that with the Cambrón gate, near San Juan de Reyes and the Valmardon gate near Cristo de la Luz mosque. The first has a good view over the plains and a space between the inner and outer doors with a fun sign; the second gate was from the original walls and ended up inside the city when new walls were built farther out. My two favorite gates are the old Bisagra gate (to the right of the New Bisagra gate when outside the city) and the Alcántara gate and bridge. Alcantara bridge was originally Roman, rebuilt several times, the gate Muslim as shown by the double-dogleg entrance. The gate is one of prettiest in the city, and you or your kids can climb up to part of the walls (note: this gate is close to the train station).

What else? In addition to all this, there are other sights not always on the “biggie” list: Museo de Santa Cruz (off the Zocodover), with a good permanent art collection and good temporary exhibits. Roman ruins, in-city the baths in Amador de los Rios square (signage and lighting could be improved but interesting as contrast with other periods), other ruins a bit farther out. San Ildefonso (Jesuitas) church in Plaza Juan de Mariana – go up the tower (no elevator) for an amazing view of Toledo. If you can’t face the climb, view from front door is pretty good. And last but definitely not least, El Greco house and newish museum (near the Tránsito synagogue, never really Greco’s house but a representative house of that period.

Important tips for your Toledo visit: The only way to really see Toledo is walking, so be sure to wear the right shoes – it’s no fun to stop exploring just because your feet hurt, while the rest of your body and brain are raring to go. Seriously: no flipflops or heels! Best is something with thick soles between you and the knobbly pavement. If you are at all unsteady on your feet or have knee problems, think about taking something to keep you upright – I’ve seen travelers in Toledo using hiking poles in the city, which is probably a good idea, given the cobblestones and the constant ups and downs. Get a good map, and take a small compass. Toledo’s streets are winding, and there aren’t a lot of streetsigns.