A Saint for Desperate Causes 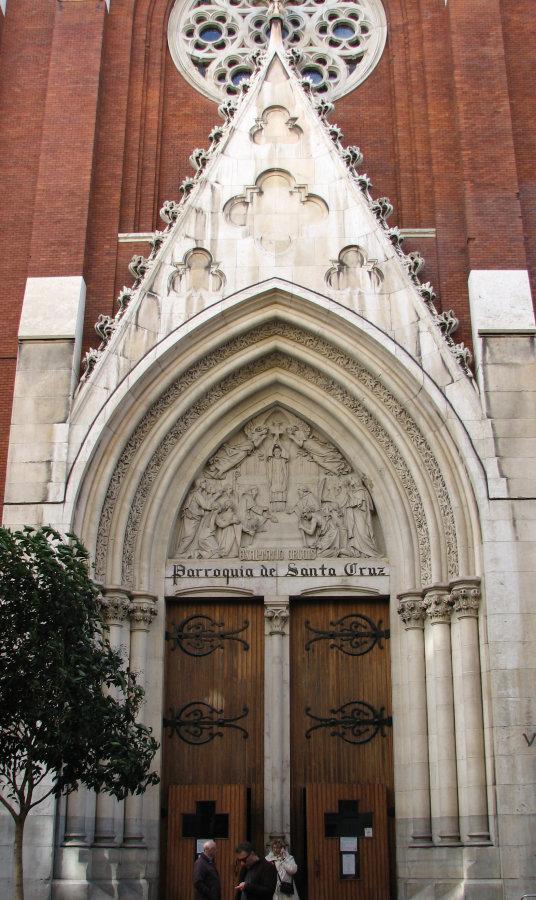 Got a big issue in your life? Something that looks almost impossible?

San Judas Tadeo is specialized in difficult causes. Maybe he can help.

This is one is one of Madrid’s favorite saint-statues, almost as popular as Jesus de Medinacelli (Plaza de Jesus 2, go on Friday).

And with good reason: Judas Tadeo is the saint of urgent, difficult and desperate causes, sometimes called “the lawyer of the impossible”. He’s a favorite in many Catholic areas, and Madrid is no exception: on his special days long lines form outside Santa Cruz church, and visits increase just before Christmas, possibly with people asking for a big lottery win.

Judas Tadeo is the “good Judas”, usually named in Spanish with a second name to differentiate him from Judas Iscariot, of the famous thirty pieces of silver. In English he’s usually called St. Jude, without the second name Tadeo used in Spanish (Thaddeus in English).

Judas was one of Jesus’ twelve apostles and probably first cousin to Jesus on both sides. Tradition tells us that after Jesus’ death, Judas Tadeo and Simon went to Persia with to spread the new religion. He was so convincing that an important general, the King and part of the court converted, but that very success caused their downfall. After yet another demonstration of their power over the forces of nature, priests to the sun and moon killed them by crushing then cutting off their heads with an ax. Tradition says their bodies were later taken to Rome where they are venerated in St. Peter’s Basilica.

So how to make a request to the lawyer of the impossible? There’s a specific ritual to ask San Judas Tadeo for special favors: recite his prayer nine Wednesdays (google “ Glorioso Apóstol San Judas Tadeo!, pariente y seguidor de Jesús” for full text) plus the Lord’s Prayer and Ave Maria, among other actions. Or maybe: just go to the church and light a mini-lamp in front of his statue.

Lest this suggestion sound odd to non-Catholics, let me clarify: I’m not Catholic and not terribly religious, but I do give thanks, make requests and send messages to loved ones far away or passed away. That might be in a forest or by a stream, but it’s frequently in churches that feel special. Lighting a candle is a nice way to focus your wishes and send them on their way.

Yes, I made a request to San Judas Tadeo. Will you?

Where: Calle Atocha 6, just east of the Plaza Mayor. Go in the door and turn right; San Judas Tadeo shares the first chapel on that side of the church, and is the first statue you see, with mini-lamps in front of the statue labeled with his name (take some small coins).

When to go: The special days are all Wednesdays of the year, and the 28th day of all months; San Judas Tadeo saint’s day is October 28, so 28th is a special day. The church stays open all day on Wednesdays, instead of closing several hours in the afternoon. For more information go to: www.parroquiadesantacruz.com

Statue: The statue is made of birch wood, dates from 1989 and holds an ax as a symbol of his martyrdom.

Santa Cruz church: Madrid lore tells us there was a Santa Cruz chapel nearby from very early times, in a neighborhood outside the walls at the start of the road southeast to Atocha country chapel and on towards Valencia. Historically the immediate predecessor of the current church was built late in the 15th c and torn down in 1868 after two fires in the 17th c. That church had a very tall tower known as Madrid’s Lookout, so perhaps the tall brick tower of the current church inherits that tradition (see plaque on the sidewalk on other side of Atocha street, corner Bolsa street for exact location of previous Santa Cruz church).

After the church was torn down, Santa Cruz parish moved across Atocha street to Santo Tomás church, a Dominican order convent and school built in the middle of the 17th century. Santo Tomás had bad luck from the start: fires in the 17th and 18th c, structural issues, expropriation by the state in the 19th century and finally two fires in the 1870’s that almost destroyed the building, which was torn down shortly afterwards.

The Santa Cruz church we see today was built 1889 – 1902 on the site of Santo Tomás convent. Like many churches in Madrid, the interior was mostly destroyed in the Civil War, though part of the parish records for births, marriages and weddings date were saved and back to the 16th century.

Tips for your visit:
If you want to visit the church, don’t go when church services are in progress (schedule on the website).

Walk around to see the other chapels and other saints. St. James (Santiago) is there wearing his pilgrim robe, and another Madrid favorite saint San Antonio de Padua “El Guindero” (the cherry-man). Both are on the right, Santiago a statue in a shared chapel and San Antonio with painted altar-screen instead of a statue. Most of the June San Antonio celebration is at San Antonio chapel on Paseo de la Florida (outdoor party on days around June 13), but part is at Santa Cruz church as home to the San Antonio brotherhood and owner of the painting telling the legend of the farmer, cherries spilled from a donkey’s saddlebags and the Franciscan monk (San Antonio) who helped him collect the fallen fruit.

Several of the chapels hold the pasos (statues on platforms carried in the street during Easter week). Santa Cruz has two Good Friday processions. The traditional routes are among the best in Madrid: one through the streets of the old city, including calle del Codo, Plaza de la Villa and return through the Plaza Mayor. The second route loops east through Puerta del Sol, calle Mayor and also returns through the Plaza Mayor.