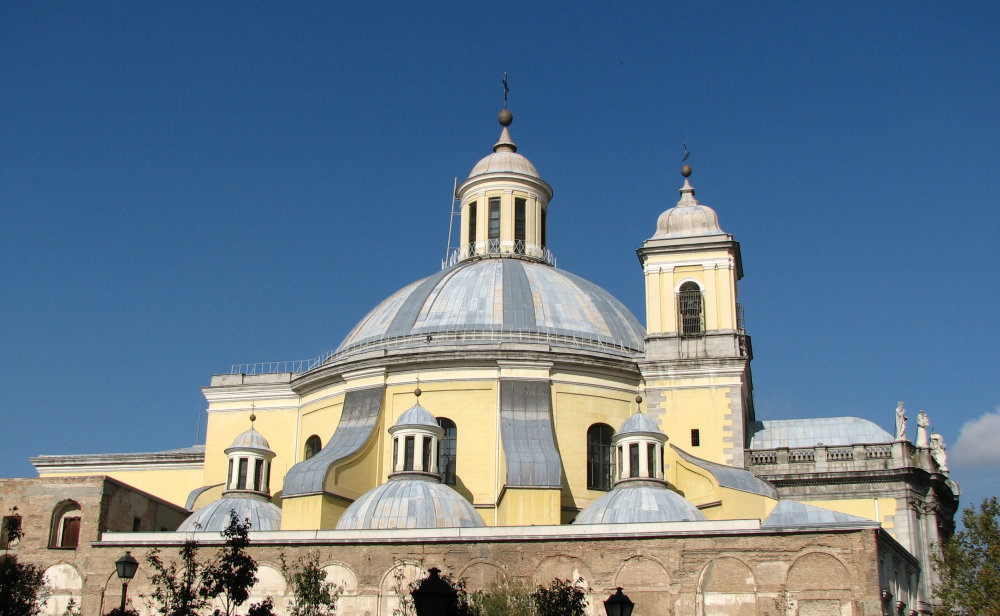 San Francisco seen from the south

San Francisco el Grande church has one of the largest circular domes in the Christian world – at 33 meters diameter it’s third after Rome’s Pantheon (43.4 meters) and St. Peter in the Vatican (42.5 meters), and fourth largest counting the octagonal dome of Santa Maria de Fiore in Florence (42 meters).

Tradition tells us that the convent associated with the church was founded by St. Frances of Assisi himself in the 13th century; the current church is mostly late 18th century, built partly under supervision of architect Francesco Sabatini, favorite of King Carlos III, one of Spain’s best-ever rulers and so good to Madrid that he is sometimes called Rey-Alcalde  (King-Mayor).  Watch for more posts about these two men, who changed the face of Madrid in that time frame.

This church is an unmistakeable landmark for people wandering around central Madrid (so check out the main façade on east side sometime soon, visible from near La Latina metro).  It’s also just a a few blocks from the interesting San Isidro / Origenes museum and San Andrés church, so the three monuments could be seen in a long morning with a bit of organization, leaving extra time for the San Isidro museum. San Francisco church museum is open 10.30-13 + 16-18.30 not Mondays or holidays, two weekday masses (8.30 + 10am) when you might slip in to see the church, though they don’t like people wandering around during the service.

The photo shows view from the south, where size of dome is more apparent than from the front in the east.