The answer to all three questions is: sidra: hard apple cider, popular in many European countries and to some extent on the other side of the Atlantic. Here in Spain it takes on a personality all its own, with legends and lore galore.

Spain’s cider-land is mostly along the north coast: Basque region, Cantabria and especially Asturias, where about 80% of Spain’s cider is produced – and drunk, with about 90% consumed right in the region. For that reason we’ll talk about Asturias in this article – though by all means you should try sidra when traveling in other cider regions.

So what is sidra like? It’s a lightly alcoholic beverage made of fermented apple juice – in Spain usually 4º – 6º (like a hearty beer); alcohol content is sometimes higher in other countries, where the espumoso (bubbly) cider is more frequent than the natural that is so popular in northern Spain.

Like wine, cider makers use different mixtures of apples to get the final product they want. That’s quite an art: like grapes, apples are different every year, with varying sugar content depending on the weather, so finding the right mixture of still unfermented juices is a delicate process.

Depending on the manufacturing process and apples used, sidra can be very pale yellow to dark gold in color, and clear or slightly cloudy. Some ciders are bubbly and some are not – see the end to learn about different kinds of cider. 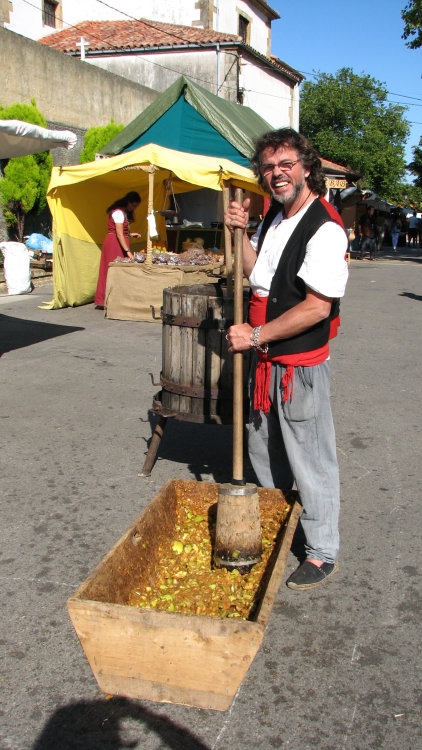 Making sidra natural The process is simple – many tiny cider houses and even country families and make their own for family and friends: see photo of Guillermo showing the traditional crushing – he’s made his own and explained the process, which is not very different for the industrial process.

Apples are harvested between September and late November, depending on the year’s weather and the variety of apples. Apple trees yield differently alternating years, with the even-numbered years a smaller harvest and the odd-numbered years cosechonas (big harvests), when the much larger harvest can last until early December.

First the apples are washed, then crushed to pulp separately by apple variety. The next step is pressing – the apple pulp is layered in a press that works with weight or a screw system and pressed several times to get all the juice. What comes out is apple juice, ready for the fermentation process (the almost dry apple pulp is often fed to livestock).

The juice is placed in stainless steel or chestnut wood vats to ferment for three to five months – shorter aging for a sweeter cider or longer for tarter cider, always varying with the kind of apple used. Cool weather is good for fermenting, so the temperature is controlled carefully during this time. After fermentation comes bottling in the traditional green bottles, taking care to not stir up the cider too much.

At bottling time, traditional llagares (cider houses) often still have a cask-tapping party called espicha for the holes in the cask. The espicha had – and still may have – the practical purpose of finishing off the unbottled cider in a cask or as a taste-test before buying a whole cask, but more than anything it’s a big party, with cider is drawn directly from the cask into pitchers or e traditional big glasses. Long ago, revellers would pay a flat fee into the cider house to drink all they could – and would pay again when returning after a potty break.

Sidra is as Spanish as vino  (wine) – and maybe more so in the north. So be sure to try it during your time in Spain – preferably up north, or at least in a Madrid cider bar.

Sidra natural is the traditional, most popular kind of cider, rather tart, even somewhat bitter if not poured correctly. Variations on this kind of cider: Natural ecológica, made with apples from orchards with ecological certification; Natural de manzana seleccionada, made with specific varieties of apples that have undergone an even more rigourous selection process.

El escanciado (pouring): Sidra natural should be poured from a bottle held arm’s height above the head into a big glass held at a slant at thigh level. That aerates the natural cider, making it a little sweeter and raising some bubbles – and that’s when true cider buffs can evaluate the cider for color and aroma. The sidra should be poured in a thin stream directly in front of the body, just hit the edge of the glass – and just enough for a few swallows as the bubbles soon disappear. After drinking, the last swig is poured on the floor to rinse the edge of the communal glass.

That’s the technique – but good escanciado is more than just technique. Style and ritual matter: a good pourer is admired for the ability to pour without looking and without splashing too much on the floor. The way the bottle and glass are held, even the flourish used to present the glass to the drinker, all are important parts of the escanciado ritual. The communal glass itself is part of the cider lore: sharing a glass puts everyone on the same level and last – but not least – lore says that pouring the last bit onto the floor thanks the earth for the cider, returning to the earth a bit of what the earth has given.

Obviously, drinking sidra natural the traditional way is a messy business. Inevitably some splashes during the escanciado, and pouring that last bit on the floor – well, cider bars always have sticky floors. Some cider bars now use the traditional glass and mechanical pourers, less fun but less messy, and smaller bars may use a plastic spout that does an ok job even with a regular glass, though without the charm of the traditional escanciado.

Sidra espumosa is a less-messy kind of cider. Like sidra natural, it’s made from fermented apple juice – then undergoes an additional process to create natural bubbles. This cider should not be confused with sidra achampañada, usually made with apple juice concentrate and added gas – the label should tell you what kind is in the bottle. Both kinds are bubbly, and often drunk at Christmas as a “poor man’s champagne” – but don’t wait for Christmas to share a bottle with friends – the bubbly goes really well with cheesy popcorn and a good movie.

Sidra natural nueva expressión A new product – it’s like sidra natural, but needs no special pouring. The manufacturing is slightly different, including a filtering and stabilization process. Supposedly this cider is fairly dry, with a hint of natural bubbles. It’s marketed as a lighter wine or “restaurant cider”. Hard to find in Madrid.

Cider trivia
– Apple varieties in Asturias: 2500 DIFFERENT kinds of apples!
– Cider manufacturered in 2015: more than 2.8 million liters (almost a million liters more than previous high-yield year 2013)
– Apples to cider, yield: it takes a little more than a kilo of apples to make a liter of cider
– Measurements big glass for sidra natural : 12 cms high, 9 cms wide at the mouth and 7 cms wide at the base (about 5 X 3.5 X 3 inches).